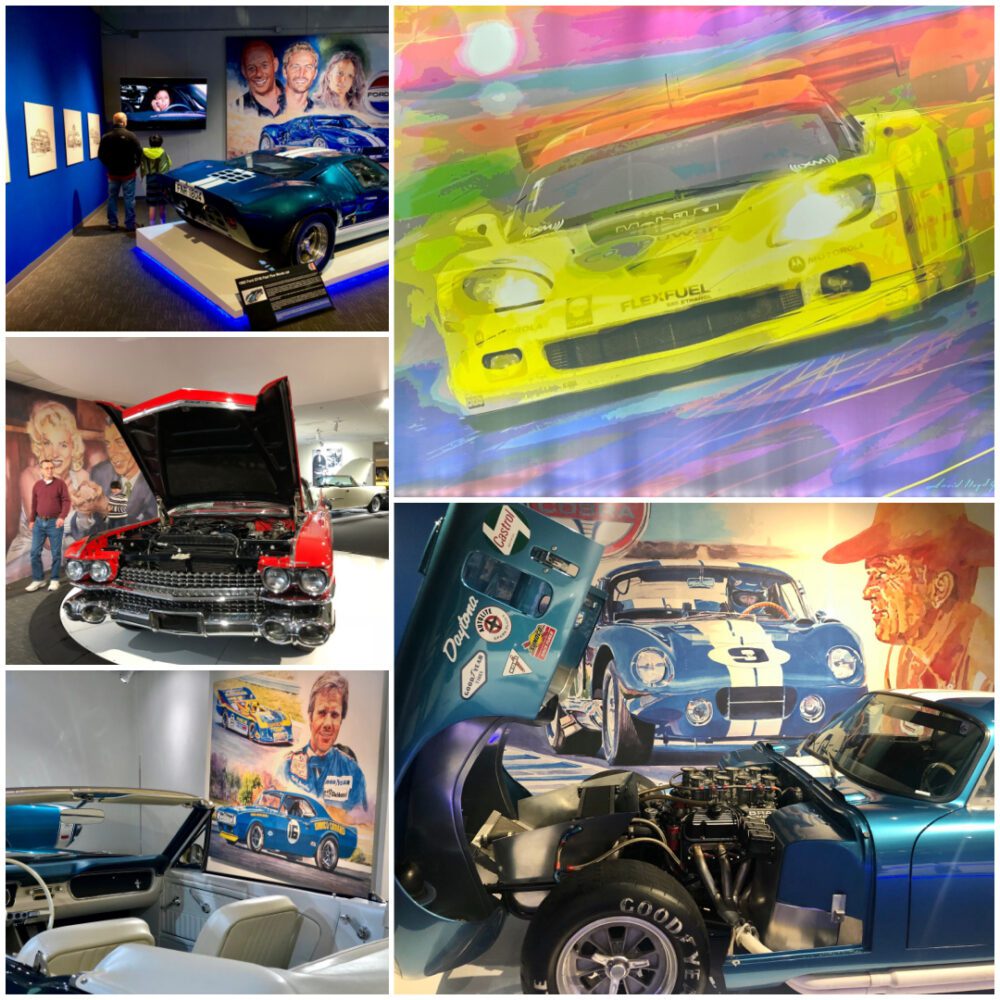 Posted at 18:08h in Happenings by Kyle Furtado

There’s a reason the Newport Car Museum appeals to everyone who loves art. On their own, the cars on display – numbering more than 85 – are breathtakingly beautiful, but stage them on platforms and turn tables, add theatrical lighting, then surround them with artwork by David Lloyd Glover, and you have a true modern design experience.

Described as a “vivid impressionist painter,” Glover was precisely the perfect artist to blend brilliant color with light and personality to make the Museum’s six galleries pop and better tell the story of eight decades of automotive design and the history represented therein. His oversized paintings, some as large as 10’ X 20’, include the Fin Car Gallery’s “Marilyn (Monroe) and Joe (DiMaggio)” placed behind a bright-red 1959 Cadillac Series 62 Convertible; the Corvette Gallery’s powerful C6-R in race mode, to go with the Museum’s 2019 C7-R in the same “fleet yellow” color; the American Muscle Gallery’s depiction of Mark Donohue in his early racing years, placed next to a 1969 Camaro SS/RS 396; and, likewise, in the Ford/Shelby Gallery, images of Carroll Shelby juxtaposed with the cars that made him famous, including the iconic 1965 Shelby Cobra Daytona Coupe recreation and the 1967 Cobra 427 SC. For movie buffs, Lloyd Glover’s portrait of Vin Diesel and his fellow stars from “Fast Five” (2011) creates a colorful corner where sits a 1965 Ford GT40 recreation used in the filming of that classic from the “Fast and Furious” franchise. (Nearby, the movie’s famous train heist scene is played on a screen, lest one forgets.)

Lloyd Glover started work as a full-time professional artist in 1969. His early years were as a newspaper illustrator and included work for Pulitzer Prize winning newspaper columnists Russell Baker of the New York Times and Nicholas Von Hoffman of the Chicago Daily News. After a stint in advertising, he returned to his artist’s studio to master the difficult medium of translucent watercolors using the classic British technique. Almost immediately he was represented by two major galleries in Vancouver, BC and quickly earned a reputation for his work as a watercolor master.

After three galleries in Los Angeles began to represent his work in the 1980s, Lloyd Glover opened a Southern California studio in Pacific Palisades overlooking Malibu beach. Working in that sunny environment set him on a path to establishing his reputation with movie celebrities, recording stars and business leaders in the U.S. His paintings were featured at international art fairs, and that exposure led him to Asia. Japan was a hot art market, and Lloyd Glover’s work became highly sought after by Japanese collectors. Year after year, he traveled to the orient to appear in one-man exhibitions. Every art event was a sell-out, and his collector following grew larger every year. Glover had also begun working in oil and acrylic on canvas, utilizing his emotional application of light and shade with a vivid impressionist palette.

Today, Lloyd Glover lives and works at his studio in Southern California. He has been an ardent admirer of the artistic styles of the Impressionists Monet, Pissarro and Sisley. He has also been inspired by the art of American painters, namely Winslow Homer, John Sargent, James Whistler and Andrew Wyeth.

Capturing color, movement and design of exotic and rare cars as well as the history that surrounds them, some of Lloyd Glover’s best work hangs on the walls of the Newport Car Museum.

More About Newport Car Museum
Within 18 months of its 2017 opening, the Newport Car Museum was included in USA Today’s “Top 10 Best New Attractions” and named Yankee Magazine’s “Best Specialty Museum.” Most recently (2021), it was named to the “Top 10% of Attractions Worldwide” by Tripadvisor and has won an award from the National Association of Automobile Museums for its originally produced historic videos. The Mid-Century Modern furniture pieces that have been integrated into the artistic stylings of the Museum are by iconic designers such as Charles and Ray Eames, Florence Knoll Bassett, Arne Jacobsen and Hans Wegner.
The count for the Museum’s private collection of rare and coveted cars has grown to over 85, and the visual art galleries for these now number six: one each for World Cars, Corvettes, Ford/Shelby, Fin Cars, Mopars, and American Muscle Cars. In addition, visitors enjoy a Pop-Up Porsche Exhibit in the Museum’s Thunderbird Ballroom and a giant Gift Shop with items curated for car lovers and others.