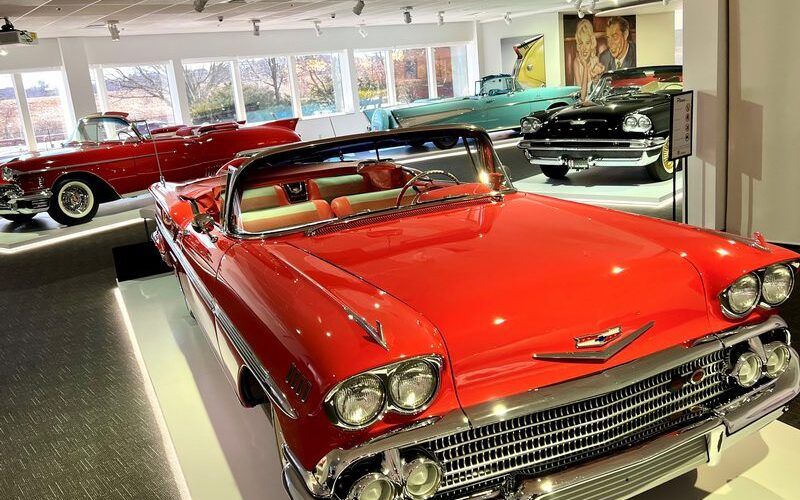 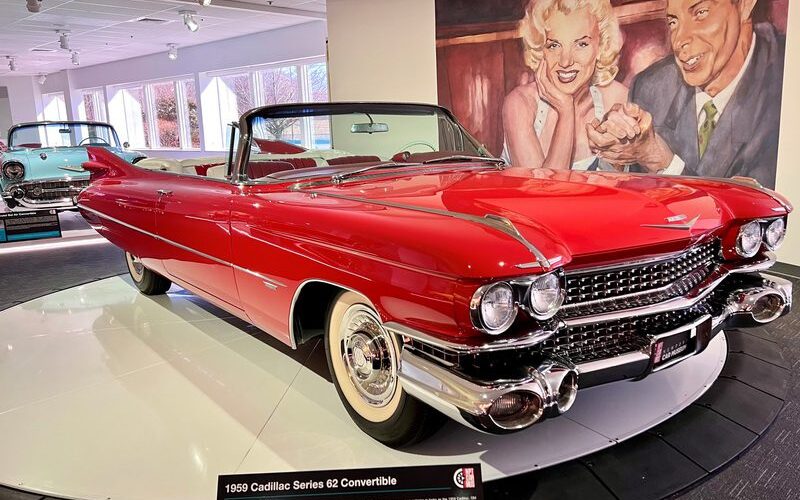 The Fin Car exhibit is a tribute to the blossoming of automobile colors after the dark period that followed WWII when most cars were black, dark blue and green. The flowers bloomed most brightly in the mid-1950s, with bright yellows, pinks, corals and reds testifying to life that was returning to normal, while the influence of the jet age spawned dramatic modifications to size, power and design lines, the latter of which is best exemplified by tail “fins” that mimic those on the rocket and jet aircraft of the age.

Though fins were first conceptualized in the late 1940s, the aesthetic endeared itself to car lovers over the next decade, first looking like an afterthought on such round-bodied cars as the 1954 Buick Skylark Convertible in the collection but then maturing to a delightful embellishment on such cars as the 1957 Chevy.

The fins on the mammoth 1959 Cadillac Series 62 convertible are fully pronounced at 42 inches off the ground, while the car’s four after-burner tail lights, wrap-around wind screen and two fake jet engine reverse lights show the extent to which designers looked to the sky. Other cars in this collection include a coral-colored 1957 T-Bird and a 1957 Chrysler 300 C convertible, the 1 hp/cubic inch muscle car known for blistering the Daytona Beach speed record at a speed of 122 miles per hour.

Also included is the private collector’s favorite: a convertible version of the 1957 Desoto Adventurer he bought as his first car for $295 in 1961.