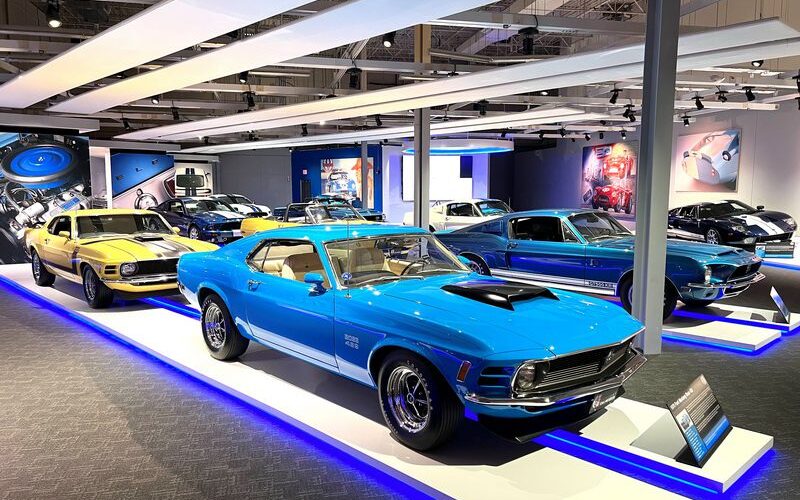 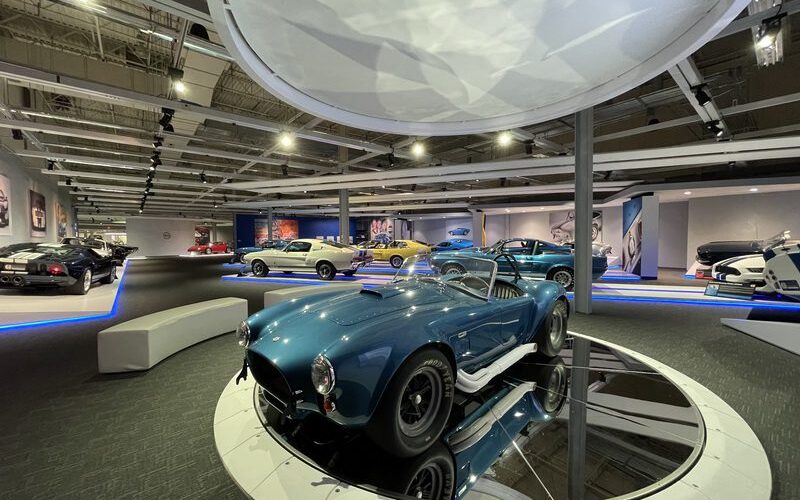 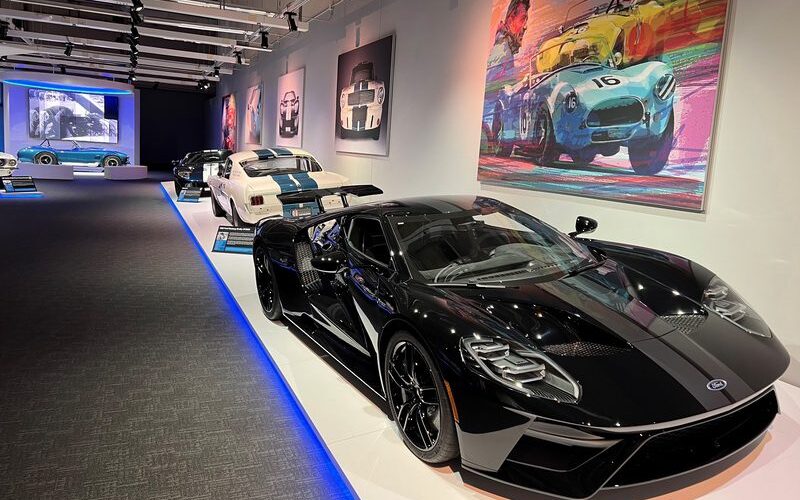 In the year after he won the 1959 24 Hours of Le Mans with Aston Martin, American race car driver Carroll Shelby retired his helmet for good, due to a heart condition. By 1962, however, he had launched the Shelby-American company and successfully recast his career to develop, mostly with Ford Motor Company, some of the most iconic American race cars and street cars produced during the 1960s.

The Ford/Shelby Car collection pays homage to Carroll Shelby’s great race cars that were so admired in their day, including the 1965 Ford/Shelby 427 SC Cobra. With its stunningly racy profile, highly recognizable side pipes, wheels, and roll bar, it is the most iconic, sought-after car in the Ford Shelby exhibit, if not the entire Newport Car Museum collection.

Several iterations of Ford/Shelby’s Mustang are exhibited, including the iconic 1965 GT350R. When Ford’s President Lee Iacocca asked Shelby to turn the popular Mustang into a race car, Shelby laughed, calling it a “secretary’s car,” but he obeyed, bumping up the engine’s performance (into the 300-320 hp range), adding performance brakes and suspension components, replacing the windows with plexiglass, and removing the rear seats. Only 34 of the 1965 GT350R’s (plus 2 prototypes) were produced, and it immediately went out and won the SCCA National Sports Car B Championship.

Interestingly, this collection’s real GT350R shares the exact same build number (#27) as its commemorative version here. The latter car was acquired in 2015 when Ford produced another run of 36 GT350Rs.

Ford’s entry in the 1969 and ’70 SCCA Trans-Am series is represented by this collection’s 1970 Ford Boss 302 Mustang. Early NASCAR racing, when big engines were shoe-horned into small chassis, is embodied by the 1970 Ford Boss 429, arguably one of the rarest and most valued muscle cars. A recreation of one of six Daytona Coupes built between 1964 and 1965 is reminiscent of Shelby becoming the first American constructor to win a title on the international scene (the 1965 FIA World Sportscar Championship), and the collection’s gorgeously aerodynamic GT40 recreation harkens back to Ford becoming the first American manufacturer to win overall at the 24 Hours of Le Mans (1966), removing Ferrari’s stranglehold on road racing. A 2005 Ford GT, which paid homage to the original GT40 is represented here as well, as is the company’s 40th anniversary rendition of the GT500KR, to go with the authentic 2008 GT500KR and 1968 GT500KR convertible included here.

A war veteran who flew B-29s, an oil roughneck, a chicken farmer…Carroll Shelby was a man of diverse talents. But he will forever be remembered as an automotive icon who, with the support of Ford Motor Company, transformed sports car racing and brought American pride to the international motorsports stage.