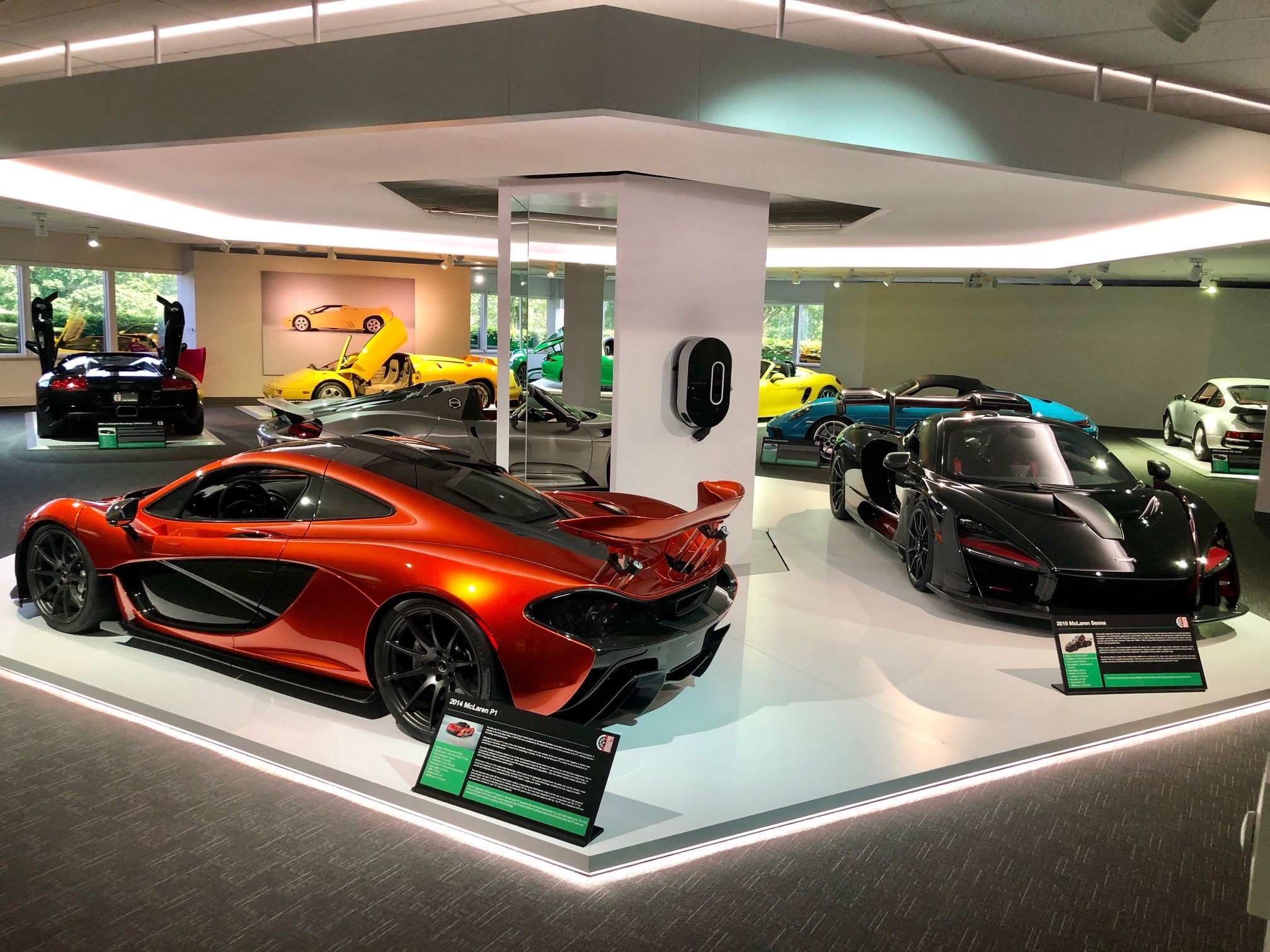 Posted at 12:19h in Happenings by Kyle Furtado

PORTSMOUTH, R.I. (June 4, 2021) – On the heels of opening its Pop-Up Porsche gallery in May, the Newport Car Museum in Portsmouth, R.I. has unveiled a 2014 McLaren P1 and a 2019 McLaren Senna, which are displayed together to make a stunning center stage in the Museum’s World Car gallery. The two new additions scream power, performance and driver reward, all hallmarks of British automobile manufacturer McLaren Automotive.

The 2014 McLaren P1, with its blinding “MSO Magma Orange” paint color, is a road-legal limited production (375 built/only 127 in the U.S.) plug-in hybrid hypercar sporting a whopping 903 horsepower. Closer in complexity to an aircraft than a conventional car, it is the spiritual successor to McLaren’s Formula 1 supercar launched in 1993. The combination of a 3.8 twin turbo V8 engine and electric motor takes the P1 from 0-60 in 2.7 seconds, and it has a theoretical 250 mph top speed but is limited to “just” 217 mph for longevity.

The 2019 McLaren Senna, inspired by one of the world’s greatest Formula One racing drivers Ayrton Senna, is the most track-focused car ever built, “legalized for road use, but not sanitized to suit it.” Its unmistakable appearance is dominated by numerous air intakes and aerodynamic additions that create 1,764 pounds of downforce at 155 mph and maintain this level through to the manufacturer’s claimed top speed of 211 mph.

Th 2019 McLaren Senna is one of 500 examples produced to commemorate Ayrton Senna’s success with the McLaren Formula 1 team from 1988 to 1993, during which Senna placed first in 35 races and won three Drivers’ Championship titles. Only 120 of the cars are in this country. If you look closely, you can see flecks of glitter in its otherwise menacing black paint job with contrasting red accents.

The Newport Car Museum is housed in the now-iconic “Big Red Building” that once served as a missile manufacturing facility in Portsmouth, R.I. An impressive 80,000 square feet of Museum space showcases a private collection of over 80 beautiful, exotic and rare cars displayed as art in six galleries: World Cars, Ford/Shelby, Corvette, Fin Cars, Mopars and Muscle Cars. A separate Pop-Up Porsche exhibit runs through October 31 of this year.

All cars are perched on low platforms or turntables, with no barrier ropes to interfere with photos. Adding to the experience are award-winning historical videos and commissioned artwork; piped in music from the collection’s seven decades of modern industrial design; and friendly, knowledgeable volunteer docents to help with questions. The Mid-Century modern furniture pieces that have been integrated into the artistic stylings of the Museum are by iconic designers such as Charles and Ray Eames, Florence Knoll Bassett, Arne Jacobsen and Hans Wegner. “Hoods Up” events, hosted both days of every second weekend of the month, allow inspection of the entire collection’s engines.