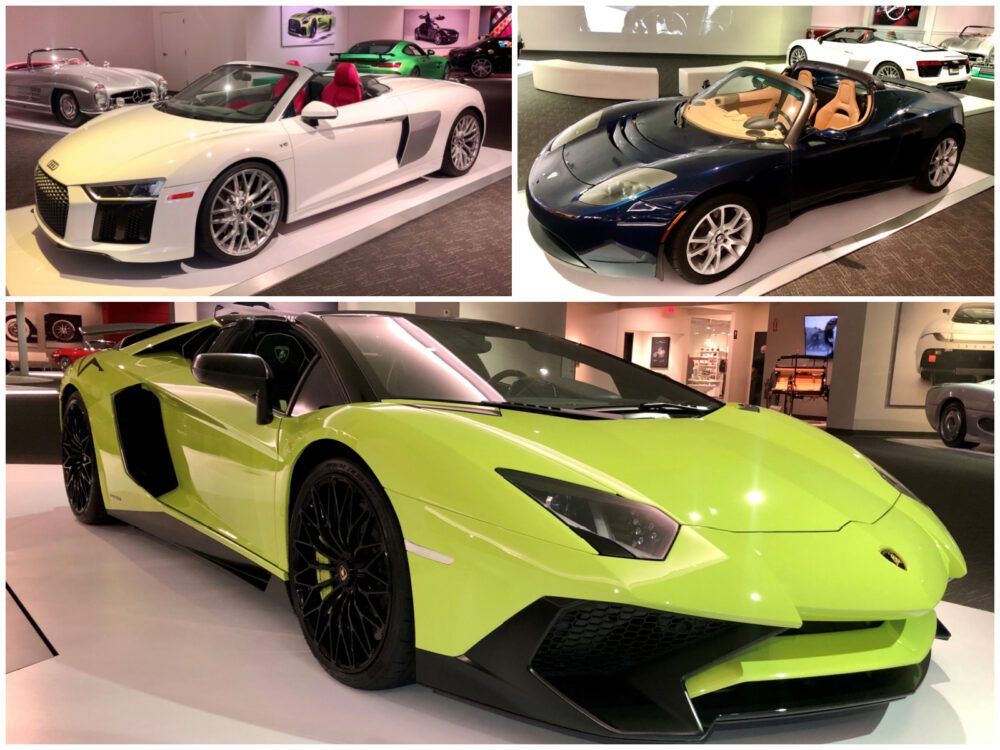 Posted at 10:37h in Happenings by Kyle Furtado

The Newport Car Museum has added three additions to its collection of more than 85 cars, which are displayed in six Galleries and a Pop-Up Porsche Exhibit. All will go in the World Car Gallery, reserved for exotic imports.

The 2017 Lamborghini Aventador SV Roadster presents in a stunning “Verde Scandal” green. SV stands for Superveloce and Lamborghini describes the car as “the most sports-oriented, fastest, and most emotional series-production Lamborghini ever.” After all, Superveloce means “super-fast” in Italian. It joins three other Lamborghinis in the collection: a black 2008 Mercialago Roadster, a yellow 1997 Diablo, and a bright red 1989 Countach. (In November, dozens of sleek Lamborghinis made the Museum their destination in the internationally organized Lambo Bull Run to benefit the Movember charity.)

The 2017 Audi R8 Spyder, Audi’s second-generation R8, is a stunning white performance car with a Lamborghini Huracán V10 engine, transaxle and four-wheel drive system. Advanced engineering and luxury amenities make it a supercar that can be driven every day, while at the same time, its style, power and track-ready handling make it a worthy competitor for the likes of the Mercedes-Benz AMG GT, Porsche 911 Turbo, and the Chevrolet Corvette Z06, all of which are in the Museum’s collection.

Finally, the dark blue 2010 Tesla Roadster is the first battery electric vehicle sports car. Produced by Tesla Motors from 2008 to 2012, it also was the first production all-electric car to travel more than 200 miles per charge. To show off the practicality of its electric cars, Tesla successfully sent one of its Roadsters around the world. It is also launched a Tesla Roadster like this one into deep space on February 6, 2018. (It is still in orbit to this day.)

All of the cars at the Newport Car Museum combine to create somewhat of a sensory overload, and the Founders dedicate themselves to keeping the collection fresh with new additions. In fact, more cars will be added in the very near future.