Posted at 16:49h in Happenings by Kyle Furtado

PORTSMOUTH, R.I. (October 4, 2021) – While Newport was in Concours mode this past weekend, the Newport Car Museum had its own outdoor car event on Sunday (October 3) that showcased almost 400 antique and classic cars in the massive fields and parking lot that surround the Museum’s iconic “Big Red Building” in Portsmouth, R.I. Hosted jointly with Mass Cruisers Auto Club– an organization devoted to year-round auto-related camaraderie and wholesome activities for the entire family – AutoFest 2021 drew not only hundreds of participants who entered their cars for awards but also hundreds of spectators who paid $5 to walk the fields and received discounted entry into the Museum, where six galleries (and currently a Pop-Up Porsche Exhibit) with more than 85 exotic and rare cars have made the destination a favorite for visitors to New England. (Tripadvisor recently named the Newport Car Museum among the top 10% of attractions worldwide.)

“It was a wonderful day for us and for all who came, especially those who did the hard work on these kinetic works of art, whether they’re originals, or redone or retro,” said Newport Car Museum Founder Gunther Buerman when he addressed the audience attending the prizegiving at the end of the event. “Our philosophy here at the Museum is to make sure everyone leaves with a smile on their face, and today there were plenty of smiles as people who love cars were able to share in this incredible tribute to ingenuity and design.” 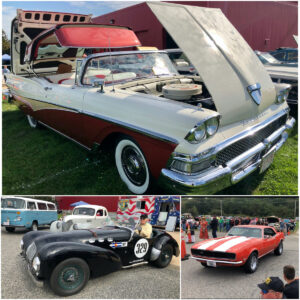 The event also named 40 other winners and featured vendors and food trucks while utilizing the talents of deejay “Cruisin’ Bruce” Palmer, who played music from the ‘50s, ‘60s and ‘70s and served as emcee for the awards.  A favorite for kids was the Valve Cover Racing competition on short side-by-side tracks that accommodated whimsical mini race cars made from foreign and American engine valve covers. For those who did not bring their own valve cover racer, the Mass Cruisers provided a choice of several that were built by club members.

“I stayed up late last night making mine with my dad and my grandpa,” said a young George Bradley of Rhode Island. “It was really fun…and I beat my Mom!”