04 Mar A Woman Moves the World

Posted at 19:37h in Happenings by Kyle Furtado 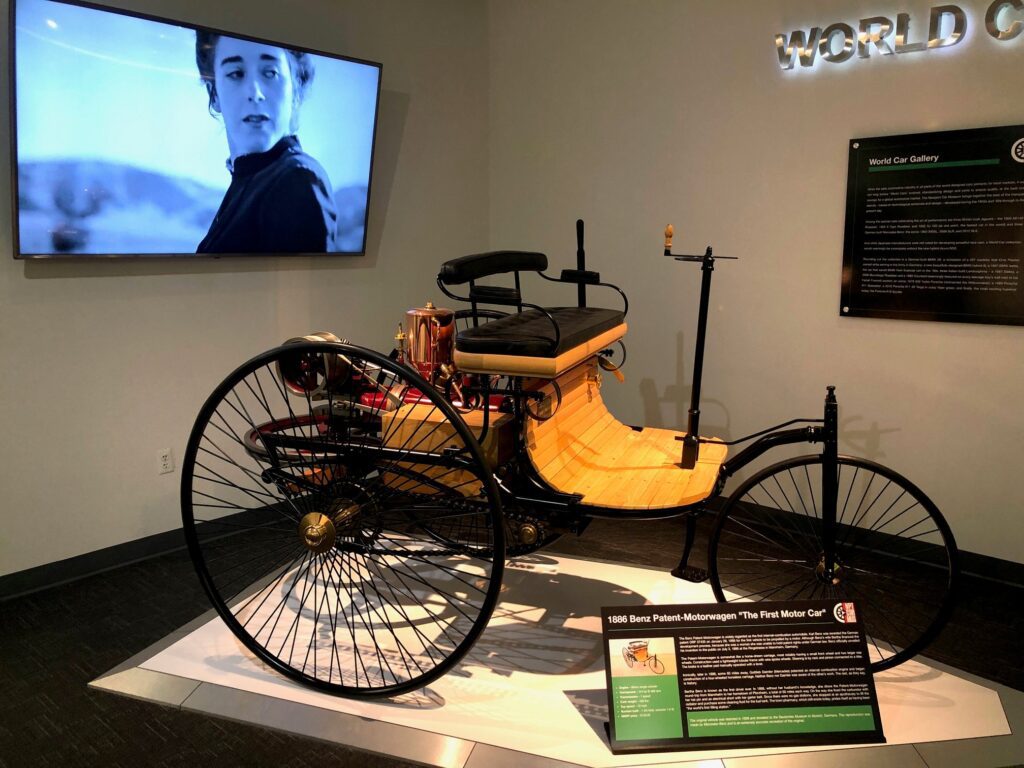 PORTSMOUTH, R.I. (March 3, 2022) – No celebration of Women’s History Month would be complete without commemorating the vital role Bertha Benz played in the development of the automobile. In a nutshell, she was the financial backer of the first internal-combustion automobile and the world’s first driver. Thankfully, the Newport Car Museum keeps her spirit alive in the form of a multi-media exhibit that explains the full story.

The 1886 Benz Patent-Motorwagen was the brainchild of Karl Benz, Bertha Benz’s husband, who was awarded the German patent DRP 37435 on January 29, 1886 for the first vehicle to be propelled by a motor. Although Mrs. Benz financed the development process, as a woman she was unable to hold patent rights under German law. On July 3, 1886, Karl Benz officially unveiled his invention to the public at the Ringstrasse in Mannheim, Germany.

Ironically, later in 1886, some 60 miles away, Gottlieb Daimler (Mercedes) patented an internal combustion engine and began construction of a four-wheeled horseless carriage. Neither Benz nor Daimler was aware of the other’s work. The rest, as they say, is history.

But this is where the story gets really good…

In 1888, Bertha Benz drove the Benz Patent-Motorwagen (without Karl Benz’s knowledge) on a 65-mile trek from Mannheim to her hometown of Pforzheim, Germany. Before she returned along that same route, she had fixed the carburetor with her hat pin and an electrical short with her garter belt and even refueled with Ligroin cleaning fluid bought from a pharmacy in Wiesloch that is famous to this day as “the world’s first filling station.”

The Patent-Motorwagen is somewhat like a horse-drawn carriage, most notably having a small front wheel and two larger rear wheels. Construction used a lightweight tubular frame with wire spoke wheels and steering was by rack and pinion connected to a tiller. The brake was a leather pad manually operated with a lever.

The original vehicle was restored in 1906 and donated to the Deutsches Museum in Munich, Germany. The Newport Car Museum’s reproduction was made by Mercedes-Benz and is an extremely accurate recreation of the original.

Though the Newport Car Museum focuses on cars from the early 1950s through to current models, this car was a must for the collection, if not for its historical significance, then for its sentimental value to Museum Founder Gunther Buerman. A native of Mannheim, Buerman, as a child, remembers his mother’s great uncle helping Karl Benz work on his invention.