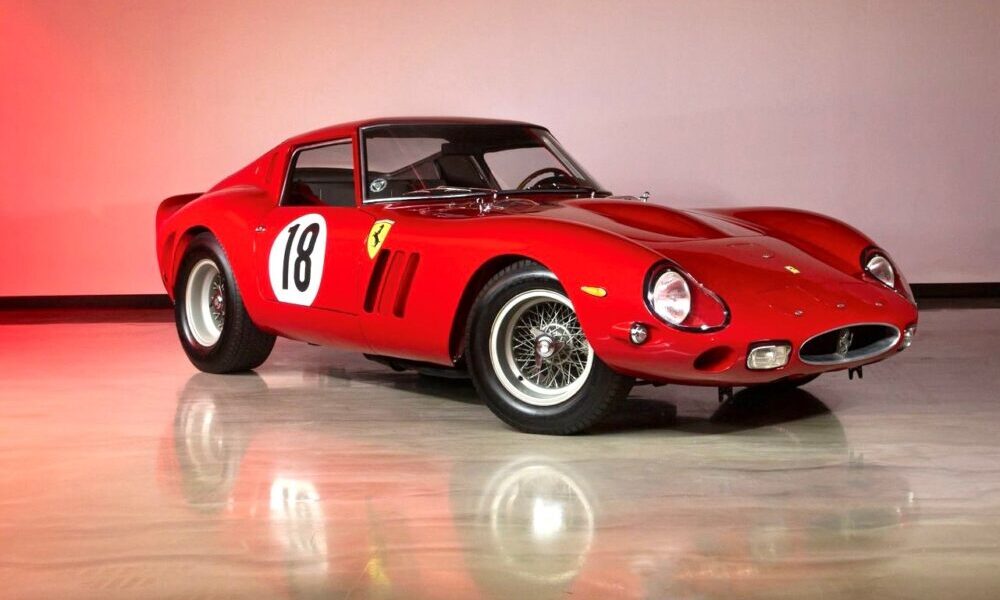 Considered by many to be the most beautiful sports car in the world, the Ferrari 250 GTO is also one of the rarest and most desirable, since it was the last front-engine racing sports car that was competitive on the world stage. Its legendary initials stand for “Gran Turismo Omologato.” One hundred cars were to be homologated for Grand Touring competition, but only 36 were constructed.

The elegant body was built by Scaglietti, while the brilliant Giotto Bizzarrini oversaw the mechanical details. Underneath, the frame was almost identical to the Ferrari 250 GT SWB Berlinetta, but the body was made more streamlined after testing in a wind tunnel at Pisa University. The nose sloped down to prevent front end lift at speed, while the Kamm tail at the back kept the rear of the car in check.

The 3.0 liter dry-sump lubricated 250 V12 breathed through six dual-barrel Weber 38 DCN carburetors to deliver 302 hp at 7,500 rpm and was mated to a five-speed manual with Ferrari’s famous open gate shifter.

Launched at Maranello in February of 1962, the Ferrari 250 GTO was clearly all about racing. There were no bumpers; the side and rear windows were plastic; and the dry sump oil tank (which enabled the car to sit lower) resulted in lots of heat pumping into the cabin.

Its record on the track made it a legend. The Ferrari GTO dominated in races all over Europe and took the FIA GT World Championship in 1962, ’63, and ’64. The battle between the Ferrari GTOs and the Shelby Cobra Daytonas at the 1964 Le Mans resulted in a 1-2-3 finish for the GTOs and fourth place for the Cobra Daytona. Two years later, the Ford and Shelby American GT40s would finish 1-2-3 at the historic 1966 Le Mans, ending Ferrari’ s longstanding dominance.

This 250 GTO started life as a 1964 Ferrari 250 Lusso and was re-bodied as a 1964 250 GTO using the original bucks and body patterns from the 1962 250 GTO #3223 (the first GTO built by Scaglietti). The V12 was built to GTO specifications, as was the suspension, brakes and running gear. The interior is replicated to represent exactly that of the World Championship winning 250 GTO.