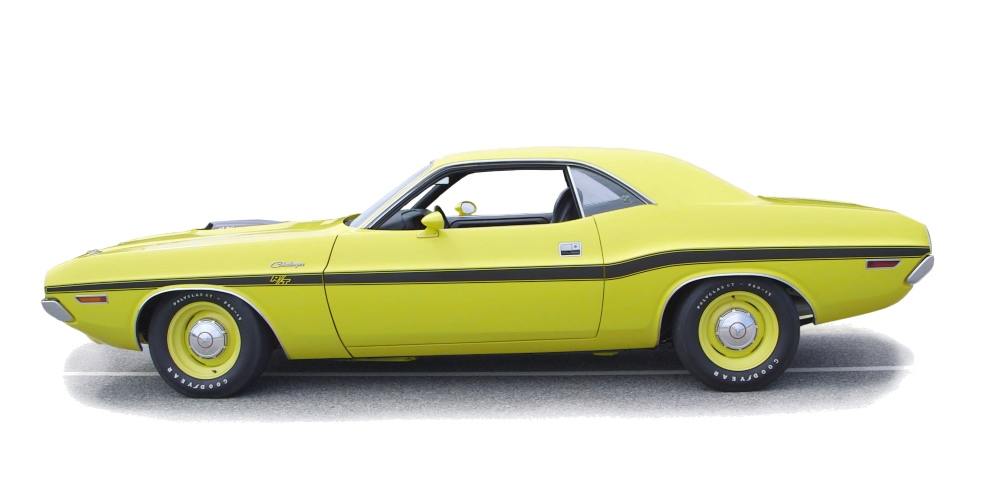 In 1970, Dodge introduced what would perhaps be its most iconic and desired Muscle Car: the Hemi Challenger. It was built on the same platform as its also very-sought-after sibling from Plymouth, the Barracuda. Warranty coverage was deliberately curtailed on Hemi-equipped cars since Dodge knew exactly how (and where) these models would be driven. Instead of the standard five-year, 50,000-mile powertrain warranty, Hemi Challengers received a 12-month, 12,000-mile warranty that was valid for the original owner only.

One of the scarcest options on any 1970 Hemi Challenger, regardless of engine choice, is the Shaker hood; this is due to structural issues found in testing that forced the factory to discontinue its installation for a good part of the 1970 model run.

Befitting the brand’s performance heritage, the Dodge Hemi Challenger went racing in its first year. For the street, it was offered in the limited-edition T/A model to meet homologation requirements for Sports Car Club of America Trans Am racing. In 1970, Sam Posey drove the lone Trans Am racing Challenger in the Trans Am series. While he didn’t win a race in his No. 77 car, Posey finished fourth overall in points. Drag racers also campaigned Hemi Challengers in the National Hot Rod Association’s new Pro Stock class. In 1970 and 1971, the Hemi Challengers virtually ruled the class.

The Hemi-powered Challenger was only offered for sale for two model years: 1970 and 1971. This 1970 example is one of just 11 that came with both the 4-speed transmission and Shaker hood.
The Jaguar XK140 Roadster was the British supercar of the 1950s.