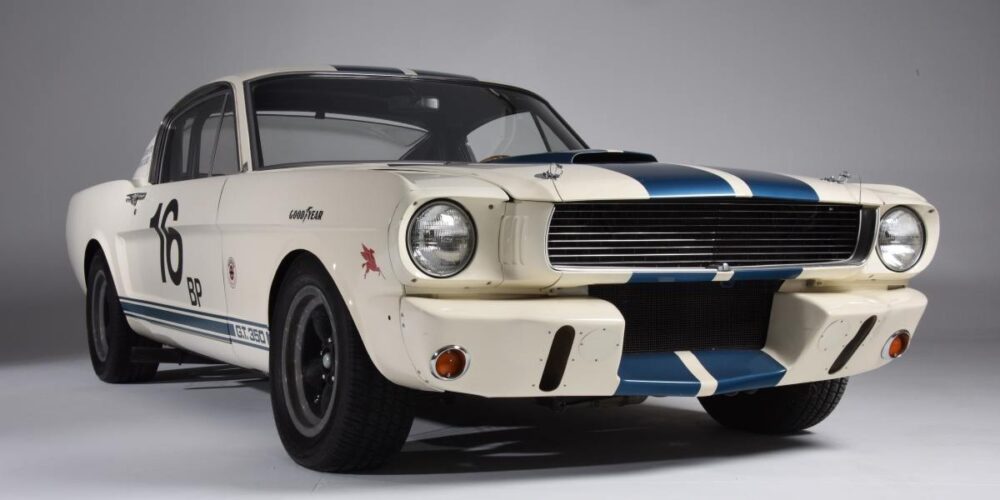 The Ford Mustang Shelby GT350R was a turnkey flat-out racing machine, which came about after Lee Iacocca, then president of Ford Motor Company, twisted Carroll Shelby’s arm to develop the Mustang GT350 sports car into a world-class race car. Shelby thought Ford’s new ’65 Mustang looked like a “secretary’s car” but reluctantly agreed. Only 33 ’65 Mustang Fastbacks plus one prototype were converted, and they were successful right out of the box.

The first GT350R made its debut in SCCA competition at the Green Valley Raceway in Texas. With Ken Miles driving, it ran in three events that weekend and won a preliminary race and finished second in the two feature heats. After that great debut, the rest of the cars hit the SCCA racing circuit, with Jerry Titus winning the 1965 SCCA B Production Championship, the Championship run-offs at Daytona and many other racing events throughout the late 1960s.

This serial number (SFM5R531) is the most complete original version of this famous race car, having all its engine parts and body panels confirmed as it left the factory. It is the 27th version built and the grandfather, in effect, of the 2015 Shelby GT350R, which also appears in this collection and shares the same build number.